Embarked Fremantle per ‘Ulysses’ for Egypt 1.4.1916.
Roll Rank Private.
Roll Unit 15th Reinforcement 16th Infantry Australian Imperial Force.
Connaughton disembarked at Suez. He marched in to Zietoun to 4th Training Battalion 26.4.1916. He entrained to Alexandria 7.6.1916 and joined the 48th Battalion. The 48th Battalion was formed in Egypt from soldiers with experience in Gallipoli and new recruits from SA and WA. Connaughton joined the British Expeditionary Force, embarked at Alexandria for France per HT ‘Huntspill’ 7.6.1916 and disembarked at Marseilles 14.6.1916. He was taken on strength with the 48th Battalion 14.8.1916. Connaughton was wounded in action with a gunshot wound to his face and shoulder 26.11.1916. He was transferred by 5th Australian Field Ambulance to 3rd Station Hospital at Rouen. On recovery he rejoined his Battalion 19.1.1917. He was wounded in action a 2nd time with a gunshot wound to his leg 8.6.1917. Connaughton was taken to the 11th Casualty Clearing Station, then invalided to the 58th General Scottish Hospital at St. Omer 8.6.1917. He was transferred to the No. 3 Rest Camp 1.8.1917 and rejoined his unit 10.10.1917. He was appointed Lance Corporal 11.4.1918.
Connaughton was KIA at Villers-Bretonneux 14.5.1918 and buried at Villers-Bretonneux Communal Cemetery, 2 ½ miles SSE of Corbie.
He was Awarded Military Medal for gallantry and devotion at Albert France, when he remained at his Lewis Gun and covered his Company’s withdrawal (Daily News 1.7.1919). The Red Cross file noted he was killed by an allied shell in the trenches when in position of No.1 gun (AWM Red Cross files)
Final Rank Lance Corporal. 48th Battalion.
Medical Condition Deceased, KIA.
Awards and Medals Military Medal, British War Medal, Victory Medal.
Military Medal Citation

‘ For gallantry and devotion to duty. At Albert on 5th April, when his Company was ordered to withdraw, he remained at his Lewis gun and covered the withdrawal.. enabling the latte stages of the withdrawal to made without loss. His coolness and devotion to Duty were a great inspiration to the men of his Coy.’(Maj. -Gen. Sinclair MacLagan)
(London Gazette 16.7.1918).

‘Their thoughts are always on an honoured
but unknown grave,
Your home is not forgotten in the home
you tried to save
Their hearts are still united in the same fond
Love of you
And loving thoughts are cherished of their dearest one
So brave and true.
Like many more brave soldiers
Somewhere in France he fell.’
(West Australian Newspaper, Killed in Action 14.6.1918) 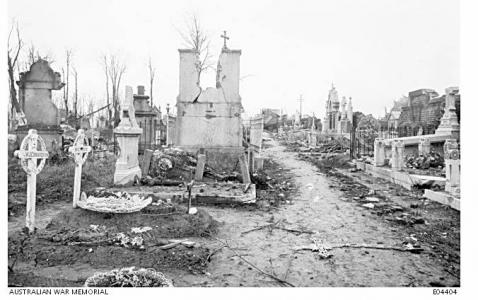