Sister Moyle enlisted as a Staff Nurse with the Australian Army Nursing Services (AANS) in 7.5.1917. She embarked at Fremantle per HMAT 'Benalla' for England 19.5.1917. Moyle disembarked at Plymouth and was marched to London and despatched to the York Hotel (a base for the AANS). After the war the British Department of Trade took over the building. In July she was detached to the Croydon War Hospital. This was not one but 5 hospitals, which catered for injuries to the ear, jaw and nerve damage.(Lost Hospitals of London website). Just prior to Christmas Moyle was detached for duty at the  to the 3rd Australian Auxilliary Hospital in Dartford (previously known as Orchard Hospital, Joyce Green Lane, Dartford, Kent. Prior to the war, this hospital was established to cater for patients with infectious diseases and smallpox. It was taken over by the Australian Army Medical Corps for sick and wounded Australian soldiers under the control of Lieut. Col. H.A.Powell. in 1917 the Australian Red Cross opened a store in the hospital to provide for the needs of the soldiers. The Australian Government was later to present a War Trophy(Howitzer) to the council of Dartford, in appreciation of the care given to the Australian soldiers by that community (Lost Hospitals of London website). July 1918 Moyle became unwell and was detached from  the Croydon Hospital to become a patient at Southwell Garden Hospital also known as the Mrs. T. S. Hall's Hospital  for Nurses in South Kensington, London. Moyle became ill with diarrhoea and remained at the Hospital for a month. It was determined that she needed  a 'change' and should return to Australia. Moyle embarked per HT 'Somerset' D 35 for Australia as Nursing Staff. She disembarked in Melbourne 4.12.1918, then departed Melbourne by ship for Western Australia as Nursing Staff.
Embarked for Australia per HT Somerset 4.12.1918
Disembarked/Returned Melbourne 15.1.1919
Discharged Appointment terminated 22.2.1919
Final Rank Nursing Sister AAMS
Medical Condition  NK
Awards and Medals  British War Medal
Notes Moyle returned to WA and worked at the Fremantle (Base) Hospital. In August 1919. Molly Moyle's engagement to Bert Head of Kalgoorlie was announced a few months after her return (Sunday Times 31.8.1919 p7 ). She married Mr. Bert Head  in North Perth on November 1919. (West Australian Newspaper  26.11.1919 p1). Later she was known as Catherine Mary Head. She died 22.12.1954 and is buried at Karrakatta Cemetery Nedlands.WA.
Photos HMAT 'Benalla' A24. Photographer Josiah Barnes, photograph source AWM PB9246
Ward at the No. 3 Australian Auxilliary General Hospital at Dartford 1916. Photographer unknown, image reproduced courtesy AWM C05043
Mrs T.S. Hall's Hospital for Nurses, 12 Kensington Gardens, London. Photograph source Lost Hospitals of London 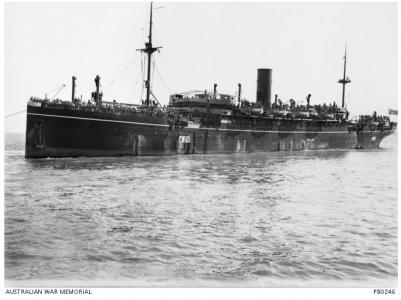 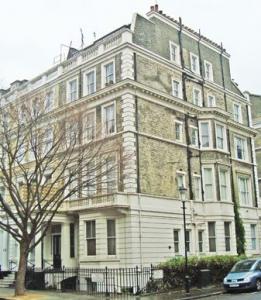