Embarked Fremantle HMAT ‘Boonah’ 29.10.1918.
Roll Rank Private
Roll Unit 3rd Reinf. (W)
Thomson  and the 3rd Reinforcmenets travelled as far as far as Durban South Africa, where it was learnt that the Armistice had been signed.  The ship reloaded with supplies for the return trip. Durban at that time was in the midst of the Spanish flu epidemic. Infected stevedores passed on the flu to the Australian crew and soldiers with disastrous results. On the return voyage, many soldiers developed  pneumonic flu. Over 300 cases were recorded. The ship was required to dock at Woodman Point Quarantine Station, WA 12.12.1918. Nurses were quickly taken to the Quarantine Station to cater for this influx of sick soldiers. Thomson, disembarked atFfremantle, unscathed. No Active Service was recorded on his file.
Final Rank Private, no active service
Medical Condition NR
Awards and Medals NA
Photo HMAT 'Boonah' courtesy Wikipedia 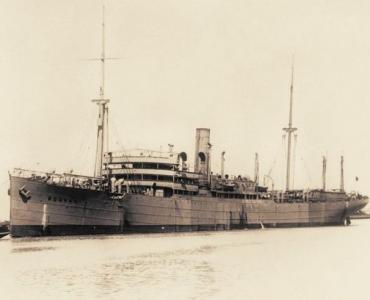