Embarked Fremantle per HMAT ‘Borda’ A30 for UK 26.7.1917.
Roll Rank Private.
Roll Unit 1st Division, 11th Battalion, 26th Reinf, AIF.
Taylor was hospitalised with Measles onboard ship 13.7.1817- 5.8.1917. He disembarked at Plymouth 25.7.1917. Taylor and his Unit marched in to the 3rd Training Bn. at Durrington 25.8.1917. Taylor marched out to the 2nd Training Bn. at Sutton Veny 7.11.1917. After a further 3 months of training, he embarked at Southampton for France 16.1.1918. Taylor was taken on strength with 11th Bn. from Reinf. 22.1.1918. The 11th Bn fought with the 1st Division in the German Spring Offensive. Taylor was on outpost duty near Meteren when he was hit by a shell and KIA 22.4.1918. He was buried in the field near a hedge and a rough cross was made to mark the site (AWM Red Cross Files) (Reported West Australian Newspaper  28.5.1915). His remains were exhumed and re interred at Meteren Civil Cemetery, 10 ½ miles SE of Ypres. The cemetery today is known as Meteren Military Cemetery, Meteren, Nord Pas de Calais, France
Final Rank Private 16th Infantry Bn.
Medical Condition Deceased, KIA
Awards and Medals British War Medal, Victory Medal
Notes Taylor’s wife, Mrs Violet Marion McDonald, was recorded at the contact address of Mrs Bennie , 5 James St. when her husband was killed. She returned to Wagin in 1918, then returned again to Guildford in May 1918, and stayed at Mrs Hardie’s home at 29 Market St. Guildford. It was here that she received her husband’s possessions. She appears to have had a mental breakdown and was hospitalized at Claremont in 1922. Her two daughters Dorothy Ruth (6 1/2years) and Elizabeth (5 years) Taylor were placed at Perth College, in the care of the Sisters of the Church, (Anglican) Mt Lawley, as Taylor’s wife was no longer able to care for them. The medals were held in trust by the Sisters at Perth College, until the eldest daughter was old enough to receive them.
Photo HMAT 'Borda'. Photographer Josiah Barnes, photograph source AWM PB0277
Shell damage Meteren village 1917. Photographer unknown, photograph source AWM E02804
Meteren Military Cemetery. Photographer unknown, photograph source CWGC
George Henry Taylor. Obituary. Western Mail 14.6.1918 Family Notices p19 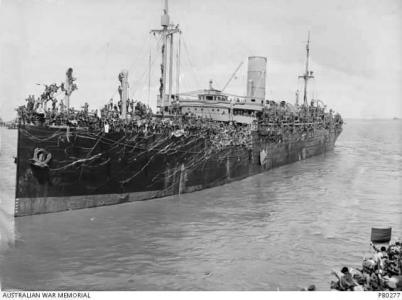 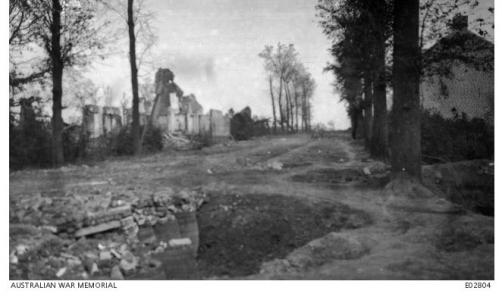 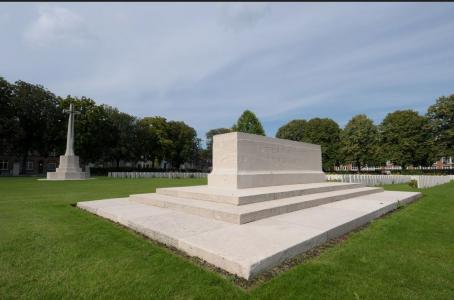