Robinson left WA with his father in 1902 to seek a position as a Naval cadet. In 1904 he obtained a position as naval cadet on board the Brittania. (Western Mail 5.3.1904 p33)
Robinson was educated at Dartmouth as an Australian Naval Cadet. He was first  appointed as Midshipman on HMS ‘Implacable’ in the Mediterranean Fleet. He was appointed to Midshipman on HMS ‘Sulphur’ 1908 (Barrier Miner -Broken Hill 28.8.1908). Robinson passed examinations to gain position of Lieutenant with 90% in all subjects and gained first class certification. He was appointed Sub Lieutenant on HMS ‘Excellent’ 1908 (Barrier Miner –Broken Hill 28.8.1908) He passed further examinations and transferred to HMS ‘Swiftsure’, then to HMS ‘Prometheus’ of the Australian Squadron under Captain Warleigh Royal Navy (RN). On return to England he was stationed at Portsmouth and devoted his time to Gunnery.
At the outbreak of War in 1914, he was in the first submarine engagement. Robinson was transferred to Chatham as an instructor in Gunnery. He was posted to Antwerp with British Relief Expedition and spent days in the trenches. He was appointed to take charge of the armoured train ‘Jellicoe’ at La Ramee Canal, Ypres. He earned the Distinguished Service Cross as Gunnery office to the ‘Lord Clive’ for action off the Belgium coast neat Zeebrugge 8.5.1915 (The Register SA 26.6.1915). It was stated in the English papers that the Kaiser had offered a reward of one thousand pounds for his capture. He was transferred to the latest monitors as Chief Gunnery Lieutenant RN.- Dover Patrol (Argus 14.1.1916).
Final Rank Commander, RAN.
Medical Condition NK.
Awards and Medals Distinguished Service Cross (Observer Adelaide 22.1.1916), Belgian Chevalier of the Order of the Cross (Observer Adelaide 19.5.1917), Mentioned in Sir John Ford’s Despatches (Observer Adelaide 3.7.1915)
Notes He married Marjorie Tangey 1915 at 27 years of age and was divorced in sensational court case (Mercury Hobart 12.5.1923)
He was appointed to the Australian Navy as Commander in 1919 and served in Australia until 1922 (Barrier Miner Broken Hill 3.2.1923)
Photos Lieut. Lionel F Robinson. Photograph source The Argus (Melb) 14.1.1916 p5
Lieut. Lionel F. Robinson. Photograph source The Journal Adelaide 11.5.1917 p1
Commander Lionel Frederick Robinson NAA:C1748, Personalities/L1402
Naval Cadet. L.F. Robinson. Photograph source The Western Mail 5.3.1904 p26 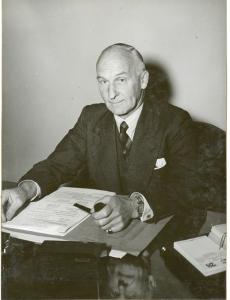 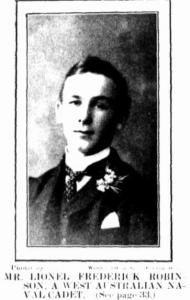