Embarked Fremantle per HMAT ‘Argyllshire’ A8 for Egypt 19.4.1915.
Roll Rank Private.
Roll Unit 4th Infantry Brigade, 16th Infantry Battalion, 4th Reinf.
Rason disembarked in Suez. He was given work in the 1st Australian General Hospital Heliopolis Hospital office but could not concentrate. He was twice hospitalised with a sprained ankle and brain concussion. Rason was admitted to Heliopolis Hospital with influenza 24.7.1915. He was believed to suffer from some mental health issues and was hospitalised at Heliopolis 23.9.1915 – 15.1.1916. He was discharged as permanently unfit. Rason did not serve at the Front. His mental health deteriorated in Egypt. He was sent to the Hospital at Cairo and then listed for early return to Australia.
Embarked Suez per HS ‘Ulysses’ for return to Australia 3.9.1915.
Returned/Disembarked Fremantle 23.9.1915
Discharged 15.1.1916.
Final Rank Private, 16th Bn 4th Reinf.
Medical Condition Mental health condition aggravated by military service. Unfit for service.
Awards and Medals 1914-15 Star (returned) British War Medal, Victory Medal (returned).
Notes Rason appears to have been the witness mentioned in 1905 in a fatal prank that resulted in the death of a classmate.(Kalgoorlie Miner 16.11.1905 p5). The newspaper gave his brother's name , however, as William was no longer a school and Ernest was in the same class, this is most likely an error. Rason had a pre-existing health condition when he enlisted. He disliked crowds and was isolated. He was deemed unfit for military service. Rason had no front line service. His father Cornthwaite Rason was a previous Premier of Western Australia and Agent General in London. Ernest's elder brother William Henty was killed ni the final days of the War. He served with the Canadian Army.
Rasonhad a troubled later life on his return to WA at the end of WW1. His family remained in England, however, Rason returned to and stayed in Western Australia. His previous family addresses Swan Street, Guildford, James Street, Guildford (1902), Meadow Street, Guildford (1903-1905).
Photos HMAT 'Argyllshire' 1914-15. Postcard by Geyer Studio NSW, Photograph source AWM P10581.002
HMAT 'Ulysses'. Photographer P.E.F. Schuler, photograph sourced AWM PS015 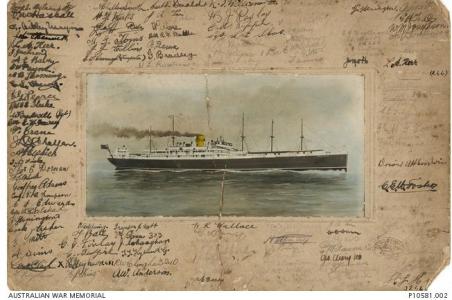